Surfing in the Algarve

The Algarve is a year-round surf destination, famous for its constant swells, un-crowded beaches, crystal-clear water and sunny weather. Great range of surf spots from beach breaks to reefs for all levels of surfers.

The west coast of Algarve – the warmest and southernmost region of continental Portugal. West Coast of Algarve is well-known due to the hot weather, great surf condition all year round, wild and protected nature.

For many riders the Algarve became Europe’s favorite secret spot, since the south-western corner provides a great alternative. Both coasts, south and west, produces waves in any size of swell. Reached less than 30 min drive from each other, both coasts have different touristic aspects while still maintaining a genuine taste of surfing lifestyle. 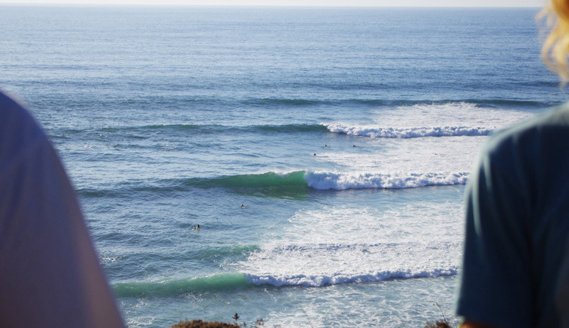 Summer season (from May till October) is with smaller waves. All the west coast is working, and each day our surf coaches choose the right spot for beginners and experienced surfers. Often it’s our home spot Vale Figueiras, due to its ability of picking up most of the swell.

Winter season (from November till April) brings bigger swells and makes the south coast pumping, opens up an entire new dimension. That’s the time for Surfaris, time to explore reef breaks and secret spots along the southern coast from Sagres till Lagos or Portimao. Many places are hard to reach without 4x4 Jeep and difficult to find without surf guides. 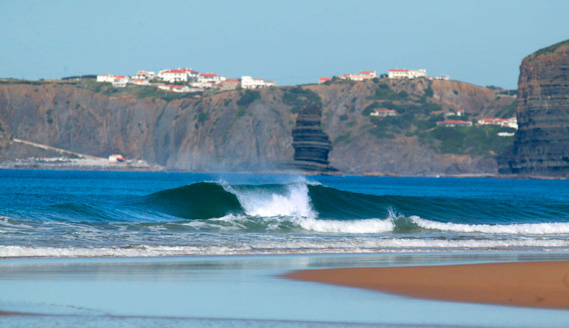 The West Coast receives swells from the north and northwest. With consistent waves all year round, breaking over sand breaks and a variety of point breaks. It’s a unique and protected stretch of coastline. (Odemira to Sagres is all Natural Park.)

Major surfing destination for serious surfers around the world, as the powerful Atlantic swells are forming perfect waves. Quality of the waves can get from average till epic. During the winter the wave size can reach till 4-5 meters high. Best wind is from the south or no wind.

The South Coast receives swells from the south and large swells from the west. Perfect time for waves is winter time, when you can enjoy ideal surf conditions in the water and hot coffee on the beach.

Water temperature is around 20 degrees in summer time and 15 degrees in winter. Temperature stays low because of Atlantic ocean currents and the north winds , but can change unpredictably to warmer or colder, not depending on season.

Wearing 3/2 wetsuit is enough for summer and 4/3 – for winter. If you’re afraid of the cold, take your boots and hood for the winter surf.

Algarve's west coastline is kept to be one of the wildest and least explored protected territories within Iberian peninsula and one of Europe’s most stunning coastlines.

The Vicentine Coast Natural Park (or Costa Vicentina in portuguese way) runs from Alentejo region, connecting with Sudoeste Natinal Park on the north, all the way down to the south-western point - Sagres.

In fact there is no major city in sight, there are only small towns and tiny villages. The closest point of civilization for us is Aljezur. It is pretty Portuguese town, with old moorish castle surrounded by whitewashed village, just 15 km away on the north.

Bordeira village is cute with it's lovely garden, and Carrapateira is on the south from us, provides gorgeous views to large Bordeira beach and beautifel dunes. 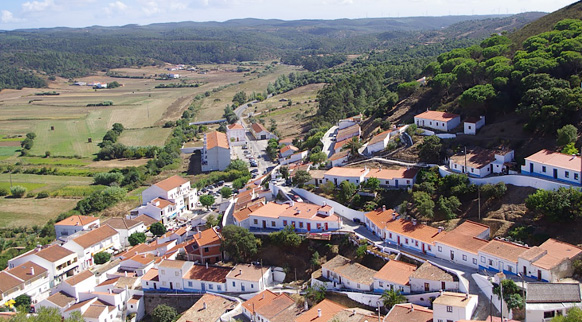 South Coast of Algarve is a famous touristic destination. It is formed by a long stretch of fabulous beaches with crystal-clean water and impressive reddish cliffs. On the other hand all those towns, as Lagos, Portimao or Albufeira (which is called a Mini-Ibiza) offer unforgettable nightlife. 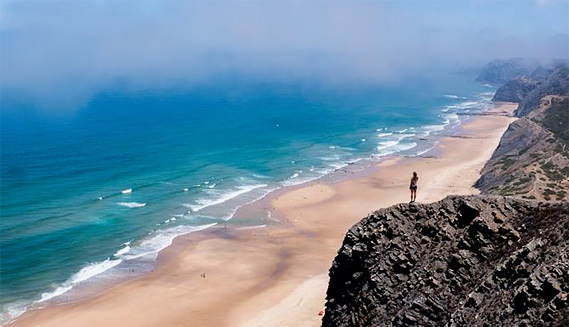 Lagos is Algarve´s Party capital with plenty of bars, inhabited by Aussies, Kiwis, Canadians and Americans bar hopping. For those young travelers that want to attend our surfcamp: do not worry - it is easy to get from the camp till Aljezur, Sagres or Lagos to spend a legendary night.

Sagres lies at the western end of the Algarve, next to Cabo Sao Vicente. It was here that five centuries ago, Prince Henrique set up a school of navigation which has played a crucial role in the Portuguese discoveries. Romans believed that the cape - the southwestern-most point of Europe was the end of the world.

It is worth a visit the little town of Monchique and its famous thermal spa, nestling in the Serra de Monchique mountain range. The highest point of the mountain is at nearly 1000 meters offers splendid panoramic views across the Algarve to the Atlantic.

Home spot, picks-up most of the swell. Some Portuguese people says “if there s no waves in Portugal – time to get down to Vale Figueiras”. If the sand banks are on the right place, they form the best beach break in the Algarve. It’s a wild beach, better access by 4x4. Best cakes “Bolos de Berlim” are sold in summer time.

Great beach break, partly protected from the northern wind. Gets very crowded especially in summer time, although you have nice snack bars with a pleasant view.

One of the loveliest beaches in the area, with the scenic view from the cliff over the ocean and a whitewashed village settled on the slope. Beach break in the bay, when the swell is over 1.5 meters Arrifana produces a smaller fun wave. (Protected from north winds.) Park your car at the top to avoid issues with the police and climb down or take a shuttle, who will drive you for 1€ (in summer time).

Beach break, sheltered from the eastern and southern winds. On the right day it can provide a very good left hander. Wide beach area with the dunes and the river; attracts many kitesurfers. Beach bar in the middle of the dunes, parking is on the cliff and access to the beach is across the river.

Europe’s southwestern peninsula, surrounded by the Atlantic Ocean, has different beaches to surf, according to swell and wind conditions. Tunnel, Beliche, Mareta – choose one of them, or if it’s not to suit, make your way toward Lagos or Portimao. Great spots all along the south coast, but better you know which place you go, for don’t end up driving the whole day.